I’ve started shoring up some of the bugs that have crept into Proxigram as the underlying services have evolved their APIs. For example, Flickr is finally SSL-only across the board (yay!).

While doing this, I see that Instagram is now very specific about valid names for apps that use their API. In our case, they don’t want “gram” to be part of the app name. So, I started using a thesaurus and some random word combination programs which spit out ChromaticLove. I like that well enough, so that’s the new name.

As part of this update, ChromaticLove now supports SSL, and I recommend everyone using the app access the API via SSL.

The changeover will happen over the next few days. You’ll see changes — *including* at the API level — renaming everything Proxigram to ChromaticLove. I’m going to be a little more cavalier than normal and just break backwards compatibility with CSS and variable names. If you have any concerns, please get in touch.

Hi there – Just wanted to update everyone on a new app that we just released called Proxigram. It’s a simple service to get your photos on your blog or other web site using a simple JavaScript library. You can manage your Instagram credentials there and keep sensitive OAuth credentials out of JavaScript files or your WordPress setup. It’s a fairly limited use case, but it solved a need for us and was fun to build.

Even better, the entire project is open-source, so if you’re looking for a good example of a working Node.js/Express.js project that uses Passport.js for OAuth authentication, Twitter’s Bootstrap with LESS compiled on the server, everything is on Github.

I’ve written up a longer blog post on my personal blog.

There will be more features coming. After looking at this, I realized I had some other pain points with my photography that I want to deal with, so expect some additional functionality soon.

Update in the works – send us your feedback

Hi folks, just wanted to post a quick note letting everyone know that we’re hard at work on an update to ToDone. We’ve received a lot of good feedback over at our support site. If you haven’t had a chance to let us know what you want to see in an update, please swing by and post your ideas or feedback. This is also a good time to report any bugs.

Thanks again for all your support. We appreciate it! 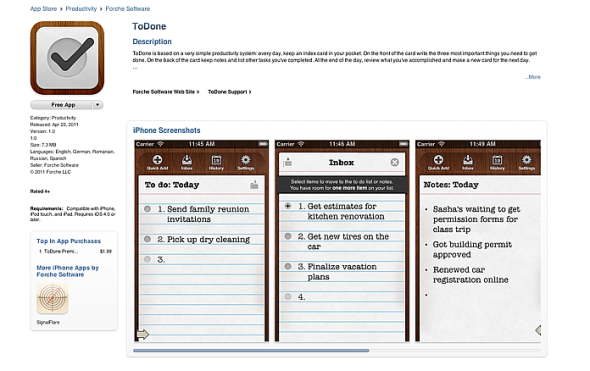 The app is live in the App Store. Head on over to download it now!.

We’re also already planning the first update with some new features and functionality. We’d love to hear what you want added, too. Head on over to our support site and make suggestions. If you’re enjoying the app, please let folks know by leaving a review at the app store.

Thanks everyone – we’re excited to see this one launch. This is just the beginning for this app. 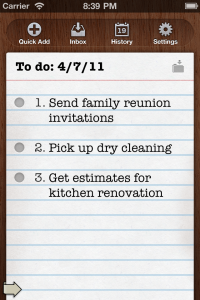 When I created Forche Software, I had projects like this one in mind: a great idea from a friend who wanted a buddy to help him get it out to the world. We’re happy to announce ToDone, a to do list app for the rest of us.

The thing I love about this application is that it make keeping and tracking a todo list as simple and frictionless as possible. No tagging, no projects, no contexts, and no dates beyond today, tomorrow, and someday. Working with the app is basically the same as working with a sheet of paper – no complex forms or data entry. Just type in your task. That’s it.

If you want more information about the hows and whys of this system (we’re calling it minimal lists), the about screen and the product page both have links to some posts that inspired my buddy to design this app. In one sentence, the goal is answering “What must I get done today?” The system emphasizes focusing on a narrow list of priority tasks each day, ideally three but up to five.

In our last 20 days or so of beta testing, I’ve been using it every day, and enjoying it. I’m looking forward to seeing it get out into the world. I do recognize that it’s not going to be the perfect app for everyone, especially the folks that lean more toward a GTD style list. For me, however, it’s the first to do list app that makes sense for my workflow. It’s a quick in-and-out to create tasks and managing the list takes 5 minutes. The reminder to plan the next day has been a huge win, too.

We just submitted the app last night. ToDone will be a free application with some extra features that can be unlocked via an in-app purchase. You’ll be able to use the to do system as designed for free. The upgrade offers a daily reminder to plan the next day, the ability to tweak the number of items per day, and different themes. It also offers a way to say “Thanks” if you enjoy the app.

When it launches, we’d love to hear what you think. If you have tweaks, changes, or features that you want to see in the app, let us know.

Want to beta test our apps?

If you want to beta test SignalFlare and our other apps, you can sign up at our TestFlight site. I have room for 10-15 people and will update this post when we’re full.

If you have any questions, let me know.

SignalFlare 1.1 for iOS is in testing now. The primary change in this version is the addition of a simple Google Maps URL to the text message. This should allow you to send your location to anyone that can access Google Maps on their phone. If they have an iPhone or Android device, the link will actually launch into the native Google Maps app. This should also alleviate the need for the recipient to have the app before its useful for you.

If you have any feature requests, please let me know at the support site.

I had joked a few weeks ago that the first app I’d submit to Apple would be a really odd utility with a narrow, narrow use case. Well, the product page is updated at our main web site, so I’m happy to share that the app is SignalFlare.

The idea for this came out from two use cases:

In both of those cases, I don’t really want to broadcast a GPS location to Twitter or something that public. Ideally, I’d be able to text someone my location and let them find me that way. So, that’s what SignalFlare does. Nothing more, nothing less.

Am I expecting this to be a killer app that everyone needs on their phone? Nope. But I needed it, so I built it, and am sharing it with the world (Assuming Apple approves it!).

I’ll update on Twitter when the app is approved, or if I run into issues with Apple. Hope this goes smoothly.

A frantic amount of work has gone into getting to this point, but I’m happy to finally make Forche Software a real entity. This company will be the home for side projects. I know the burning question for many will be whether I’m planning on quitting my day job. The answer is a definite “No” — this is just to set up real, non-day-job-related apps and projects, so I can safely hire outside collaborators and keep everything cleanly separated. More announcements as they’re ready.